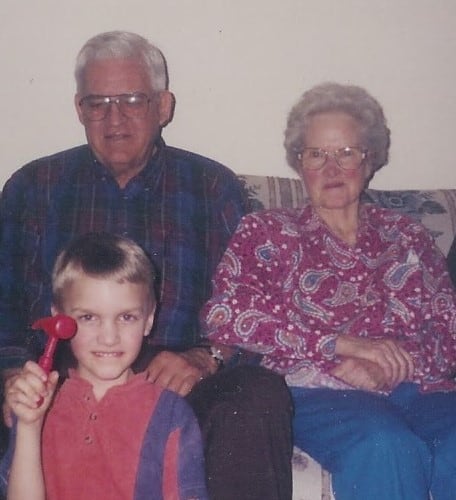 Dwight and Betty Farnworth with a Grandson

Caring for Betty After the Stroke, Part 2

My grandparents, Dwight and Betty Johnson Farnworth, were diligent journal writers their entire lives, for which I am blessed and grateful! I find so much goodness and strength as I read their entries. Not that life was rosy and smooth for them, far from it. But, to watch them press forward with faith and hope and perseverance anyway gives me fortitude in my own life.

This is part 2 focusing on the care Dwight gave betty as her health continued to decline after a stroke in 1997. Read part 1 here.

The remainder of Dwight’s journal entries for December 1997 are essentially a daily medical record of Betty’s medications, blood sugar readings, and weight gain and loss due to edema and other health problems as she declined.

The entries Have been abridged to reflect just aspects of dwight’s care of betty after her stroke.

When I got up at three this morning, I checked my pill boxes and found I hadn’t taken my pills last night. I’ve done that a couple of times. I get so set on getting Betty her pills and all the other things I have to for her and just forget me.

I took Betty over to Mary’s to get her hair fixed at 2:30 this afternoon. It makes her feel so much better…

Betty was sick all night. First, she got a cramp in her left foot. It happened before about a week and a half ago. I worked on it for the better part of an hour. Her back hurt her three or four times and I had to rub it to take the hurt away. They took up most of the night. I got very little sleep…

Most of the time, I feel that I’m up against an impossible job. Everyone tells me what a good job I am doing here at home, but most of the time, I doubt at what I do and wonder if I couldn’t do more. Also, it seems that Betty and I are always fighting. She just doesn’t want to do the things that she should do. I often wish I was out of this situation and yet I know I’ll always do my best to make her life pleasing because I love her so much.

although dwight doubted his efforts, we all saw how hard he worked to give betty all the care she needed during that difficult time. over the ensuing months, her health continued to decline until she could no longer be cared for at home. Dwight’s beloved Betty passed away 4 September 1998.

I hope you enjoyed that bit of family history as I did. See you again soon with another story from the past.

Caring for Betty After the Stroke, Part 1

Missionaries in Our Family Tree