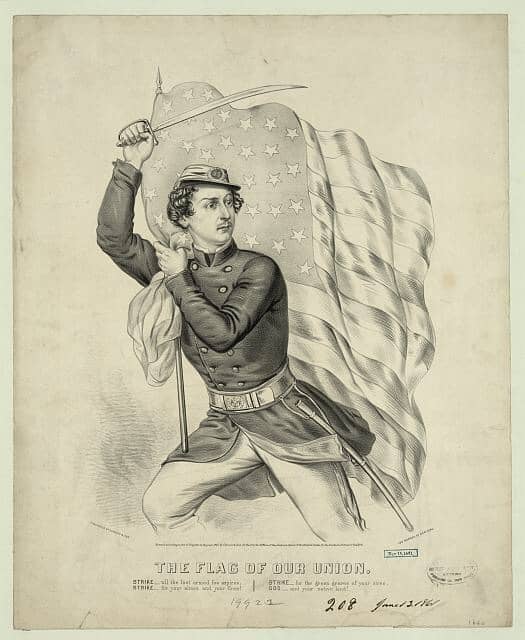 The Dangers of Searching for Civil War Deserters

We have several accounts of Civil War soldiers in our family tree who were assigned for a time to the job of rounding up deserters. The stories never end well. What follows are some accounts from those involved in what came to be known as the “Crawford Township Raid,” in which my husband’s great-great-grandfather and uncle, Isaac and Reuben Stafford, played a part.

On Thursday night last about midnight some five or six soldiers detailed for the purpose by Cat. Irvine of the 9th Ohio Cavalry, visited the house of a Mr. Lower, a drafted man, living in Crawford Twp., in order to arrest him and another man by the name of Vance.  After surrounding the homes and not finding them they proceeded to the barn with a light.  They were soon met on the outside by the men for whom they were searching, armed with rifles and revolvers.  Firing commenced immediately and was kept up between them until both the drafted men were shot down, one killed on the spot, and the other living some twelve or fifteen hours.  The attacking party had one man killed, and another shot through the side, supposed at first to be fatal, but it seems he is likely to recover.  We learn that Colonel Irvine was ordered to take them dead or alive. They were both buried in one grave followed to their last resting place by a large concourse of people.”

“In the interest of THE AGE’S readers, I would ask you to give me a detailed history of the so-called “Crawford township raid.”

“Well Mr. AGE man, it has been along time since that trouble and I may not remember all the particulars necessary to a complete history of the affair, but will endeavor, in brief, to do the subject justice.”

“Apprehending some trouble of a violent nature in that stronghold of opposition to the draft and the war, these men were armed and equipped according to law and felt that they could whip their weight in wildcats.  When a short distance from Lewisville, the raiding party was divided into sections, one section taking the road to New Bedford, the other the road to Chili, with the view of raiding both roads and meeting up at Chili and exchanging notes before proceeding further on our mission–shall I say of mercy?  It did not prove such.  The section of men on Chili road was placed under command of Samuel Morrison, and that on the Bedford road I took charge of.  At about daybreak next morning Morison’s (sic) party surrounded the house where they expected to find Louis Wentz and JOHN LOWER–I think I have these names correctly.  After searching house and immediate premises and failing to find their men, concluded they had been misinformed and were about to leave, when a woman, in German language, told her boy to go to the barn, which was some distance away, and notify LOWER and Wentz so they could escape to the woods close by.  George Bible, who understood the order of the woman to the boy, informed his comrades who rushed to the barn in advance of the boy and surrounded it, thus preventing their escape.  After a short parley REUBEN STAFFORD, one of the bravest of the brave, went to the barn door, threw it open and received the shot from LOWER’S gun and soon died.  LOWER was then in turn fired upon and instantly killed.  Wentz rushed from the barn to get away, but was soon overtaken by a gunshot wound in the bowels and died the next day.  I had Wentz removed to the house and sent for a physician.  When I asked Wentz why he and LOWER had allowed themselves to get into this trouble, he replied that they had gone to town (Coshocton) a short time ago with money enough to pay for substitutes but had been advised there by some disloyal and indiscreet person to save their money, and shoot and kill whoever came after them.  He gave me names of these ill advisers, but, as they are now dead, let the mantel of forgiveness cover their unpatriotic conduct.

“LOWER’S dead body was turned over to his friends, and the dead body of STAFFORD, of the raiding party, conducted to his family.”

Dear Sir:  On Sunday last I commended the organization of a posse of citizens to assist me in capturing some drafted men (who had never reported) in Crawford Township this county.  By Monday evening following I had the party completely organized; but a heavy rain-storm caused me to delay the expedition until Tuesday evening when I started with about twenty picked men, armed with revolvers only, some of which were of an indifferent character.  I am greatly in need of arms.

The nature of the country through which we had to pass and the localities of the men we sought to arrest made it necessary, as I thought, to divide the grand posse comitatus into two divisions, one of which I took to work on the main Bedford road, intrusting the other to Major Morrison, to work on the road from Chili to Bedford.

My party searched the dwellings, barns, milk-houses, chicken-coops, &c. on Bedford road, where we suspected deserters to be secreted, but failed to find any.  They were out visiting that night or hid in the woods and caves.

Major Morrison and his party were more successful.  The first barn they searched disclosed two men, Lewis Wens and John Sower, who gave battle most desperately.  They sprang from their hiding places and got the first fire upon our men, killing Reuben Stafford almost instantly.  Our boys then went in on their muscle, killing one man outright (John Sower) and mortally wounding another (Lewis Wens).

Samuel Taylor, one of our men was severely wounded by a pistol shot in the side.  He will recover in a short time, it is thought by his physician.

Our boys fought nobly, and the conduct of the whole party throughout the entire expedition was of the most unexceptionable character and but for the loss of Stafford and the wounding of Taylor I could be well satisfied with the expedition.

What a sad, sorry ending. Isaac lost his brother that day, his parents lost a son, Reuben’s wife and two small children lost a husband and father. It didn’t go any better for the deserters. War is so hard and complicated.

I hope you enjoyed that bit of family history as I did. See you again soon with another story from the past.

To My Dear Wife Nora