After having such genealogy exhilaration this week with solving the case of John Donohoo, the elder brother, I just could not get the other John Donohoo, the younger brother, out of my head. I REALLY wanted to know what happened to him as well. His trail had gone cold after he deserted his military post during the Civil War. So, I picked back up where I left off, and started digging a lot harder. And what do you know? I made quite a bit of progress.

This is what I previously knew about John W. Donohoo, the younger brother:

By 1850, P. Donohoo, a shoemaker, resides in District No. 2, Nelson, Kentucky, with J.W. Donohoo, male age 14, born Kentucky, who attended school that year.

On July 4, 1855, John W. Donohoo enlisted in the 2nd Kentucky Cavalry, Company F at Bardstown. He was born in Bardstown, Kentucky, age 20, with blue eyes, dark hair, 5’6″ height, and his occupation is shoemaker (like his father, Patrick). This service was short lived; on November 1, 1855, he was sent home by civil authority. I need to look further into what this means, exactly.

A month and a half later, John W. Donohoo is enumerated in the US Census on June 20, 1860, at the Carlisle Garrison in the East Ward Carlisle, Cumberland County, Pennsylvania. He is age 24, male, shoemaker, born Kentucky.
The last previous document I had for John W. Donohoo was that he deserted his military post on June 10, 1862. I did not find him after that in Kentucky, in the Bardstown area, directly with any of his family members, or in the FAN research I conducted around his siblings. I had no leads.

After finding resolution for John Donohoo, the elder, I was so determined to find that same resolution for John W. Donohoo, the younger. I began again with what I knew about him, and dug deeper in online searches at all the usual sites. But this time, I did not stop on page 2 or 3 or 4 of the results. I kept going. And I found what I was looking for.

On March 14, 1864, John W. Donohoo enlisted as a private at St. Joseph, Missouri in the Missouri 35th Infantry, Company E, for 3 years service. This is him. He was born in Nelson County, Kentucky, occupation: shoemaker, age 27, same blue eyes, dark hair and 5’7″ height as previous records, single, and his legal rep is Mrs. Sarah A. Bishop, Bardstown, Kentucky (his widowed sister!) His military record continues this time: on Apr 20, 1864, he joined his group from the depot Benton Bks; in Feb & Mar 1865, he is on daily duty as a provost guard; and on July 5, 1865 he mustered out at Little Rock, Arkansas.

Then where? Three of his sisters, nieces and nephew-in-law moved from Bardstown, Kentucky, and lived in St. Louis during 1865-1874. John W. Had just finished serving in the Missouri Infantry. Did he go to St. Louis too?

I found some possibilities in the St. Louis City Directory: 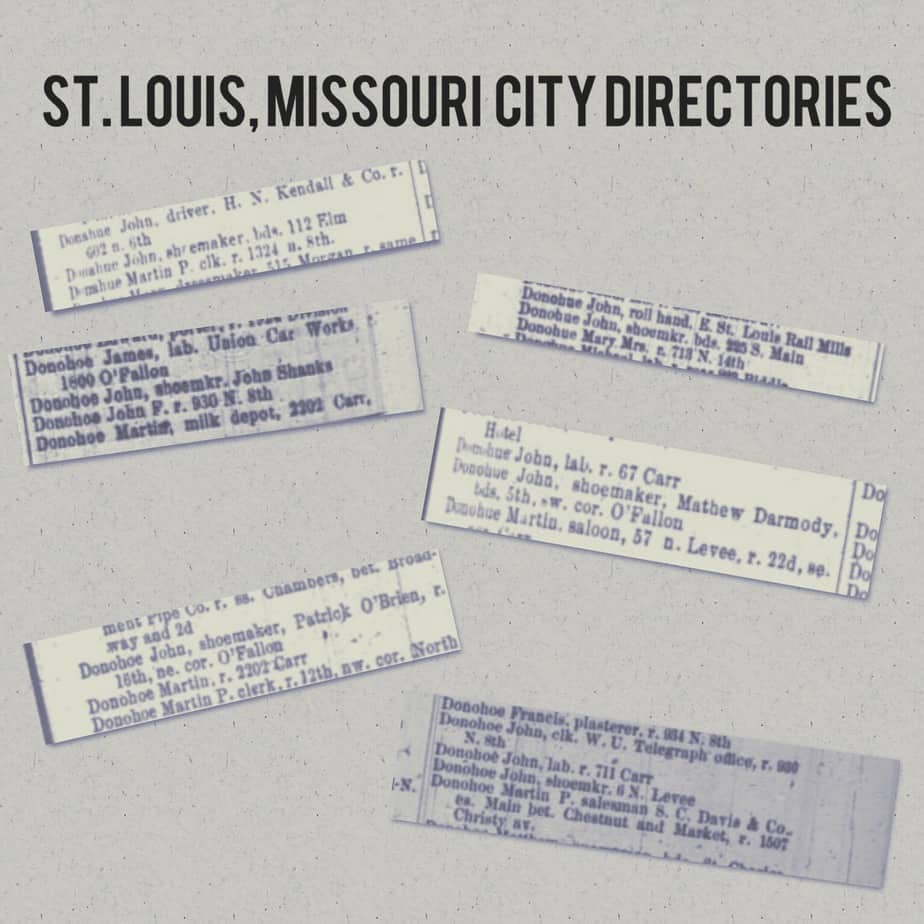 I need to follow up on these possibilities in St Louis and look for records to confirm his identity. Is this John W. Donohoo, shoemaker, from Bardstown? I need to check the vicinity of his sisters during these years, etc. I lost the trail here, as John Donohoo, shoemaker, stops appearing in the St. Louis Directory after 1872. I did not pick up his trail (yet) when his sisters moved to Chicago after 1874. But, I am happy to have made a fair amount of confirmed progress on his story, and have some leads to follow again.