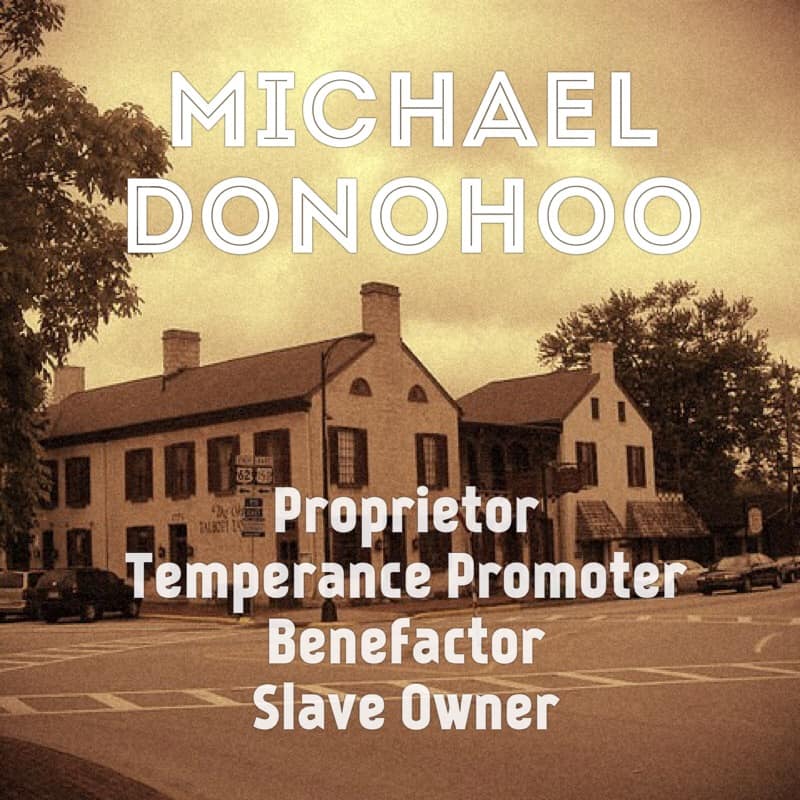 This post is part of the Donohoo Descendancy Project. Michael Donohoo was a son of Patrick and Sarah Donohoo.

Michael Donohoo was born in 1811 in Baltimore, Maryland, the third child and second son of Patrick and Sarah Donohoo. When he was five years old, the family moved from Baltimore to Bardstown, Kentucky, where his father continued to work as a shoemaker.

In October of 1836, 25 year old Michael married 19 year old Caroline Green [1, 2].The couple would welcome 11 children (5 sons, 6 daughters) into their family over the next 25 years, and say sad goodbyes to three of their daughters before they reached adulthood.

Michael bought significant amounts of property throughout the 1840s and 1850s, including the Bardstown Hotel [3, 4]. Michael became a prominent member of the Bardstown society, and proprietor of this well-reputed way station for travelers. The Bardstown Hotel has been in continuous service in Bardstown under many names and owners since at least 1797. The property has been known as the Old Stone Tavern, Hynes House, the Donohoo Hotel, Newman House, etc., now today called the Talbott Tavern [5]. 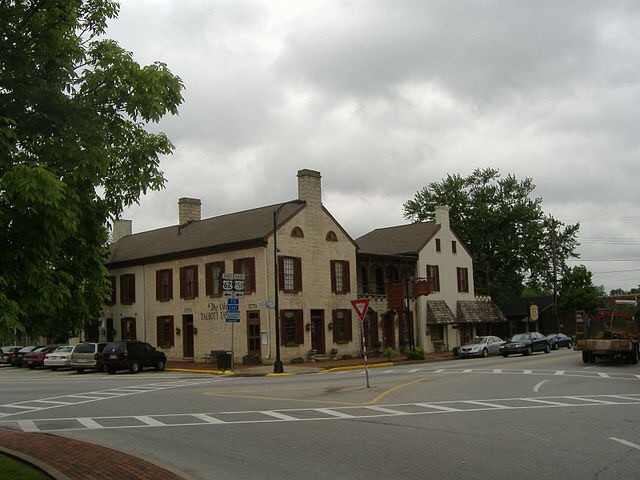 In August 1854, a pleased visitor to the Stone Tavern wrote a review, printed in the Lebanon (Kentucky) Post [6]: 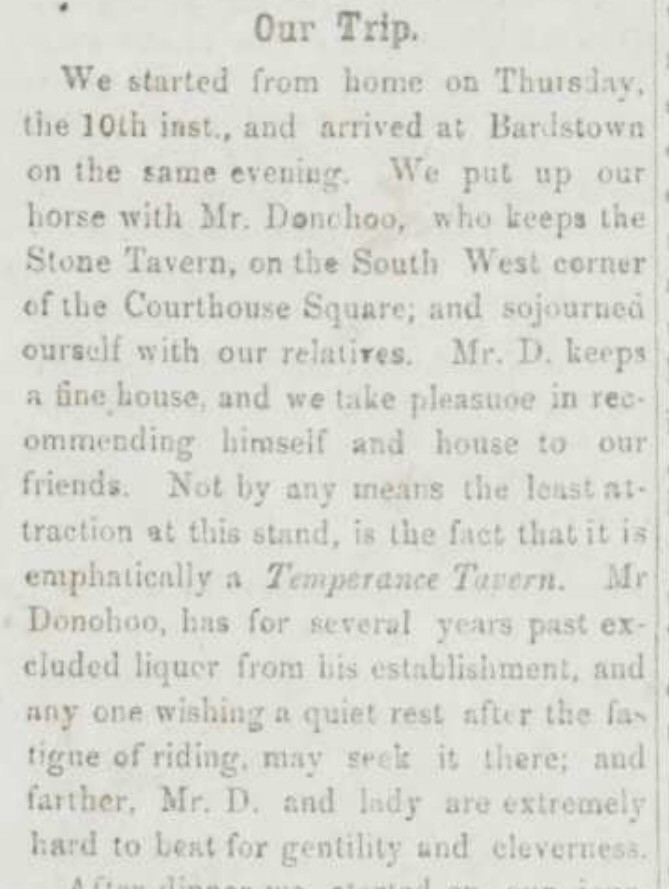 “We started from home on Thursday, the 10th inst., and arrived at Bardstown on the same evening. We put up our horse with Mr. Donohoo, who keeps the Stone Tavern, on the South West corner of the Courthouse Square; and sojourned ourself with our relatives. Mr. D. keeps a fine house, and we take pleasure in recommending himself and house to our friends. Not by any means the least attraction at this stand, is the fact that it is emphatically a Temperance Tavern. Mr. Donohoo, has for several years past excluded liquor from his establishment, and any one wishing a quiet rest after the fatigue of riding, may seek it there; and farther, Mr. D. and lady are extremely hard to beat for gentility and cleverness.”

Interestingly, the Donohoo Hotel was one of several temperance taverns of its day [7]. Whether this was a part of the larger temperance movement of the era, or whether Michael Donohoo felt it was part of his staunch Catholic religious duty, is unknown. It seems, however, that this aspect of his business helped his reputation. While one could not get an alcoholic drink there, they could put up an animal, eat a meal, and stay for the night.

In April of 1856, a huge fire spread through a large portion of Bardstown (see Conflagration! The Bardstown Fire of 1856). The Donohoo Hotel was spared, but Michael’s father, sisters, brother, nieces and nephews, twelve family members in all, lost their homes and all household goods. One of the homes was owned by Michael. As an owner of several properties, it is very likely that Michael provided shelter and goods for his family after this devastating loss.

In August of 1856, a stage line was announced with service between Louisville and Bardstown three times a week, stopping and leaving from the Donohoo Hotel [8]:

“The undersigned has just established a Stage Accommodation Line between Louisville and Bardstown, making the trip to Bardstown and back again to Louisville three times a week. The office for this line is at the Neal House, on Main between Second and Third streets, and in Bardstown at the Donohoo Hotel.

“The Stage will leave the Neal House at 9 o’clock AM, and returning, will leave Bardstown at 8 o’clock AM. The subscriber will give his entire personal attention, and hopes by a strict attention to business to command a liberal share of the patronage of the traveling public connecting with these points. The Stage goes and comes by Nazareth Academy.”

Michael owned several slaves who helped him run his tavern and hotel. In 1850, he owned seven slaves, increasing (due to babies born to the slaves) to nine slaves by 1860 [9, 10]. One of his slaves was Harriet Mathers Walters, “tall and commanding in figure, of a light brown complexion and the embodiment of energy. She weighed over two hundred pounds and possessed unusual strength for a woman.

“On one occasion, when her master and his son were in a fight, the son seemed to have the advantage and was about to stab his father with a butcher knife. [Harriet] heard the struggle and rushed in to see what was the matter. On beholding the situation, she seized her young master, weighing one hundred and fifty pounds, by the seat of his trousers and the nape of his neck, carried him to the kitchen door and threw him into the grape arbor, about six feet away. Though he suffered no bodily injury, you can imagine he suffered much humiliation and chagrin.”

In another confrontation, Michael reprimanded Harriet harshly for serving a late breakfast. She, feeling the reprimand was unjust, threw a rolling pin at her master. He threatened to sell her for this offense, and nearly went through with the sale, except for the adamant refusal of his wife, Caroline,  to allow the sale. Harriet and her children remained in the Donohoo household until emancipation [11].

In April 1865, Michael sold a house to his sister Catherine Turner for the sum of $750. The deed notes that she already resided in the house, and the house was located adjacent to the Tavern across an alley to the west [12]. In July 1865, Michael sold the Bardstown Hotel to George W. Robertson for $6000 [13]. Even though he left the hotel business behind, Michael used the sale proceeds to buy more properties over the next few years.

Michael Donohoo died of heart disease on the 8th of August 1876 [14]. In his last will and testament, he left everything “to my beloved wife Caroline Donohoo to use enjoy and dispose of as she may desire for ever.” [15] He was a man of contrasts: father of a large family, good provider for not only his own wife and children, but generous to his extended family in their need. He was a firm Catholic and a supporter of the temperance movement. He was also a slave owner, a shrewd businessman and perhaps a man with a hot temper. He most certainly had strong adoration for his beloved wife.